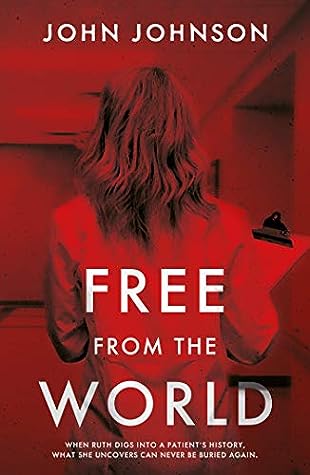 First of all, I’d like to thank Troubador Publishing Ltd. for the ARC I received via NetGalley.

Free from the World is a neat thriller that takes you into the world of a psychiatric hospital and gives what seems to me a rather detailed account of the way it works on the inside. There is some little, but valuable social commentary too, which really enriches the narrative. It means a lot to have a strong and capable woman as the leading character, and we do spend a lot of time in her head and get to root for her. The commentary on how difficult it must have been for a woman to assume her role due to the social backlash is especially on point. It would have been nice to see other female doctors at Black Roding or at another hospital for comparison.
I would have also liked to know more about some of the other patients, since Ruth and the story both focus on Richard so much, but of course his own story is really interesting on its own.
Personally, it seemed to me that the end was a little abrupt, somewhat out of proportion with how drawn out the rest of the story was, but I guess it still worked. There were also many hints and glimpses into Richard’s thoughts, and that took some of the thrust away from the big reveal in my opinion. However, I see how difficult it would have been to write everything from Ruth’s perspective.
As it is, the story is really entertaining and worth reading. I particularly enjoyed comparing the attitude towards mental illness and the treatment options then and now, because that part seemed stunningly well researched.