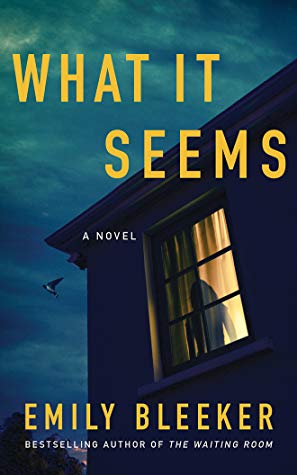 Big thanks to Lake Union Publishing for the ARC I received via NetGalley.

What It Seems is a fast-paced page-turner that launches us into the troubled head of a twenty-year-old girl who has been living with Mother for twelve years, convinced that her biological family had given her up when she was eight.
Mother puts a roof over her head and food on the table. Mother is there to protect her against the cruel, unforgiving world. Mother can be kind when she feels like it, but that comes at a price.
Physical and mental locked doors keep Tara tucked away in her room, and Mother’s countless rules are like the bars of a cage against which she stopped throwing herself a long time ago.
All she has are her few friends and her computer, her window to the world. It’s behind this screen that the Feely family lives. If she could only be normal and happy like them, surrounded by loved ones, taking part in tickle wars, mixing slime, always having someone to hug! Is this what real, caring families are like? Because it’s all she’s been craving during the twelve years in her prison.
Then, an unusual video posted by the Feelys changes her life forever. Tara was used to have everything decided for her, but now she is going to have to make decisions of her own, and they’re not going to be easy…for how could she leave her Mother?
Written in the gripping, immediate first person, this book will have you begging to know what happens next in no time at all. Ms. Bleeker is capable of writing about serious, traumatising things in a steady, relatable way.
I would have rather seen Angela getting to know the Feelys with all their virtues and flaws more gradually and subtly, and it would have been nice to give the kids more screen time. But I guess I’ll just leave that in the YouTube comments.
This book is a highly entertaining and emotional read, and it won’t let you go easily.